In some ways, the chance to direct Lorraine Hansberry’s theatrical masterpiece “A Raisin in the Sun,’’ which opens at Newark Symphony Hall on Sunday, is the result of a dream deferred for Rutgers-Newark alumna and retired vice chancellor Marcia Brown.

Brown, who was RU-N vice chancellor for governmental affairs until she retired last year, can identify with the struggles of the play’s characters, whose desires and ambitions are thwarted by racism and poverty.

A college student in the 1970s, Brown majored in broadcasting and theatre but it was hard to find work in the field. “At the time, they weren’t hiring people of color for TV and broadcasting positions,’’ said Brown.  Although she obtained a law degree from Rutgers Law School in Newark and forged a successful career in public policy and higher education, she occasionally directed plays, including a 1979 production of “Raisin."

The play will be performed at Newark Symphony Hall on September 17 at 7 pm and September 18 at 2 p.m., a matinee performance dedicated to seniors and students at 2 pm. For more information about purchasing tickets, go here.

Hansberry’s classic remains powerful and relevant today, says Brown. Set in a cramped Chicago apartment in the 1950s, it centers around a Black family whose limited opportunities and resources create conflict as they struggle to realize their dreams. The title comes from a poem “Harlem,’’ by Langston Hughes, which includes the lines, “What happens to a dream deferred; does it dry up like a raisin in the sun?”

“This play tackles racism, discrimination, classism and sexism in a way for us to see both the objective effects and the profound personal burdens this family is experiencing,’’  Brown observed. “I think in light of these social issues, the intersection between hopes and dreams is essential to understanding the central theme of RAISIN which is the profound need we all have to live in dignity,” said Brown.

Brown intends the production to be a tribute to the late actor Sidney Poitier, who passed away this year on the 62nd anniversary of the play and starred in the original1959 Broadway play and the 1961 film. The performance is also as part of the 75th anniversary celebration of Rutgers-Newark (RU-N) and an effort to raise student scholarships. It is co-presented by Rutgers-Newark and features RU-N staff members in major roles, including Donita Devance, Darlene Brown, Rajaan Hollis and Isaiah Odumuko, the son of HR Assistant Director Lenese Jean.

The play was ahead of its time, says Brown, and explores inequities that still exist.

“It tackles racism, discrimination, classism and sexism,’’ Brown observed. “I think in light of the struggle around feminism and identity, the issue of hopes and dreams and how they intersect when you’re experiencing the material conditions of poverty,  is always timely,’ said Brown.

Hansberry was the first Black woman to write a Broadway play and made the groundbreaking decision to choose a Black director, Lloyd Richards.

“She was brilliant but also prescient,’’ said Brown. “To have a Black woman in the play say she wants to be a doctor and not be married back then was unheard of. And she foresaw the whole struggle against colonialism as it was just beginning. This is an extraordinarily visionary piece that is very seriously articulated and ennunciated.”

"Raisin" shines a light on housing segregation and its characters’ longing for financial stability, better housing and career opportunities beyond the servant jobs that support them.

Brown hopes that local audiences see themselves in the play, even though it’s set in another city during the Civil Rights Movement. “The Younger family is a Newark family,’’ she says. “Audiences should see their own struggles mirrored in the production.’’

Among Brown’s  goals for “Raisin” are that it will  spark the creation of a hometown theatre company, similar to troupes based in Maplewood and Orange, that can be headquartered  at Symphony Hall, which is experiencing a renaissance with the restoration of the historic nearly century-old building and expanded programming.

Corporate sponsors of the play include PSE&G, Prudential, Audible and the Victoria Foundation. 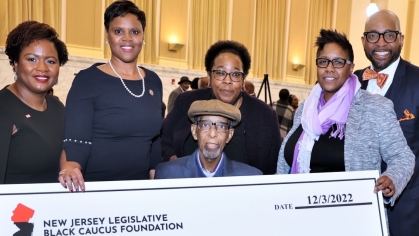